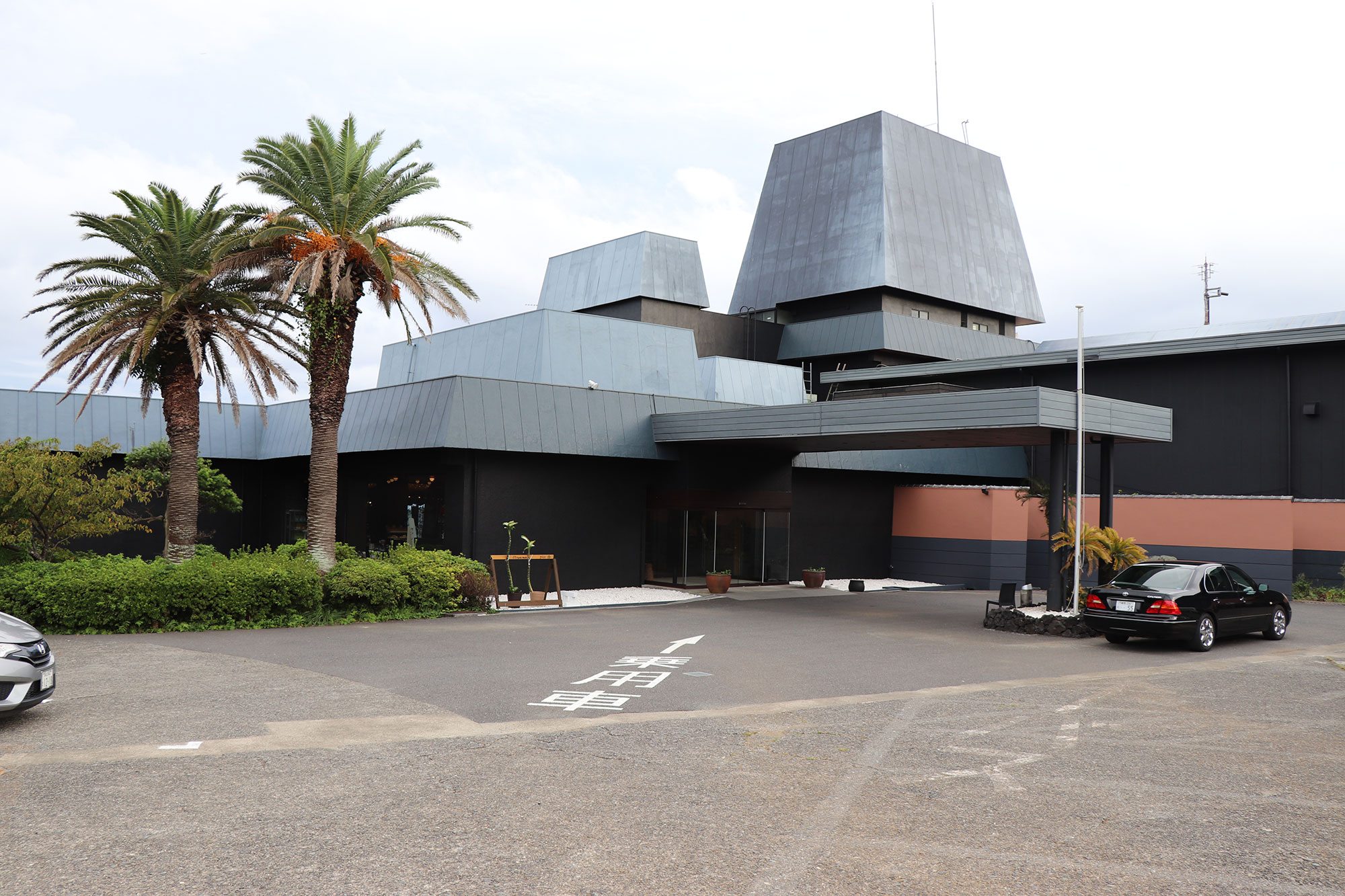 Located in the southern part of the Izu peninsula in Shizuoka Prefecture, Shimoda View Hotel is a long-established hotel built on a hillside that offers panoramic views of Shimoda’s Sotoura Beach from all rooms. This article presents the light-up project undertaken at this hotel. 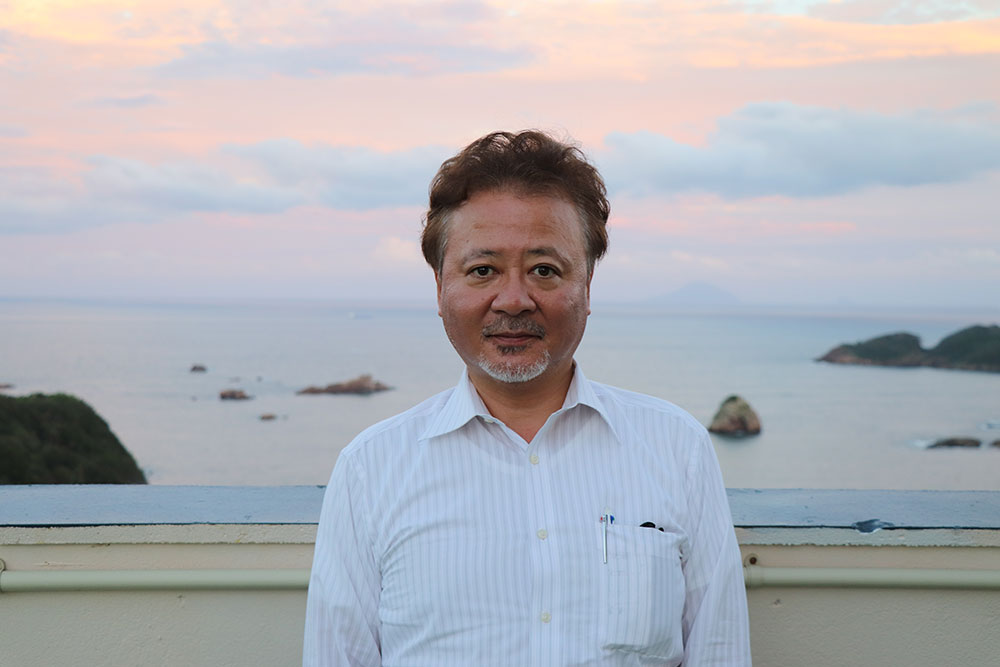 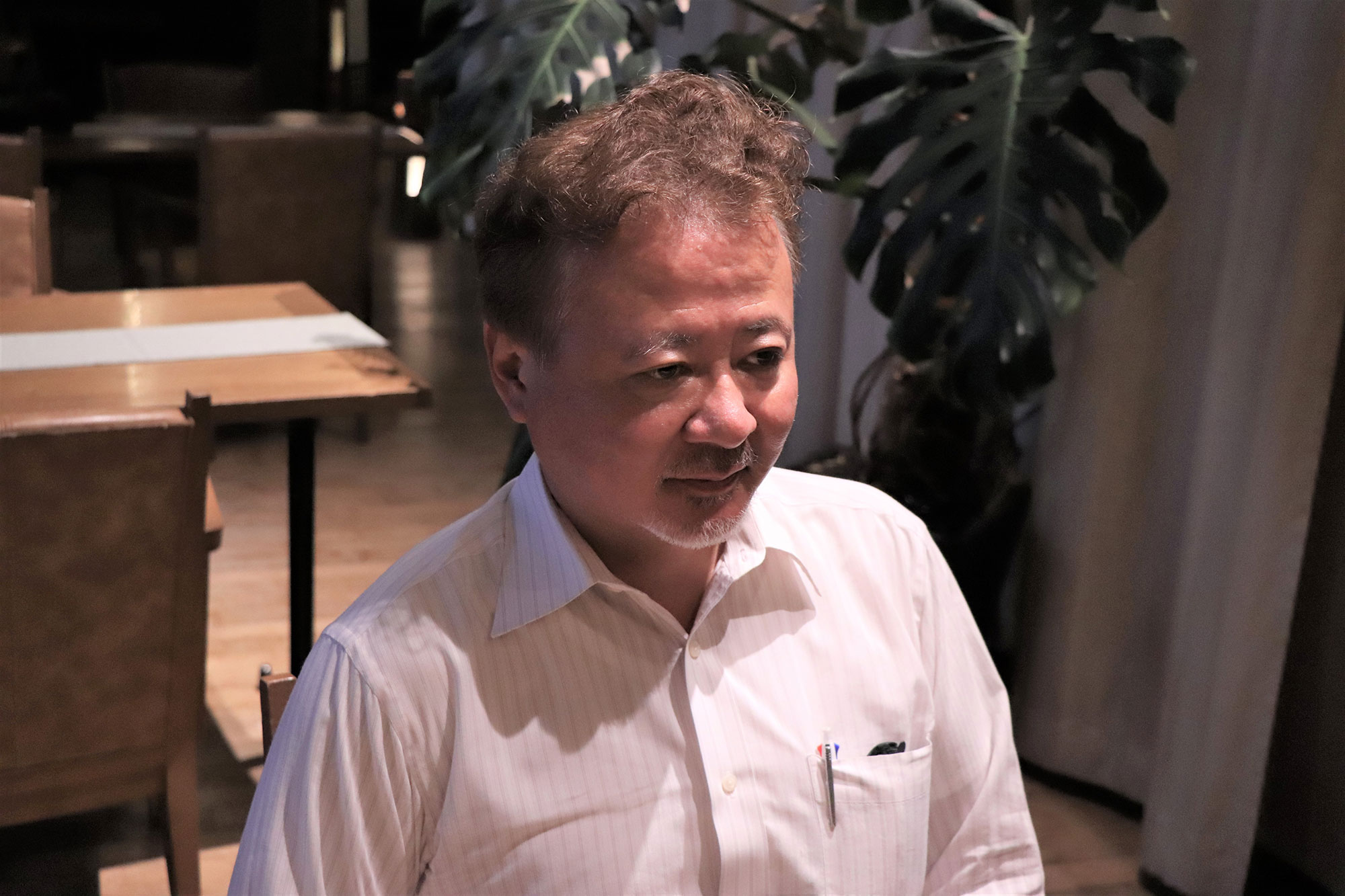 Mr. Maruyama during our interview

Shimoda View Hotel is such a lovely hotel, where you can fully enjoy some of Shimoda’s most splendid views.

Mr. Maruyama: Thank you for coming all this way. Our hotel was established by my father back in 1972. The magnificent views from here are something we have always been and continue to be very proud of. Today, you can see the islands of Izu-Oshima, Toshima, and Niijima way off in the distance. 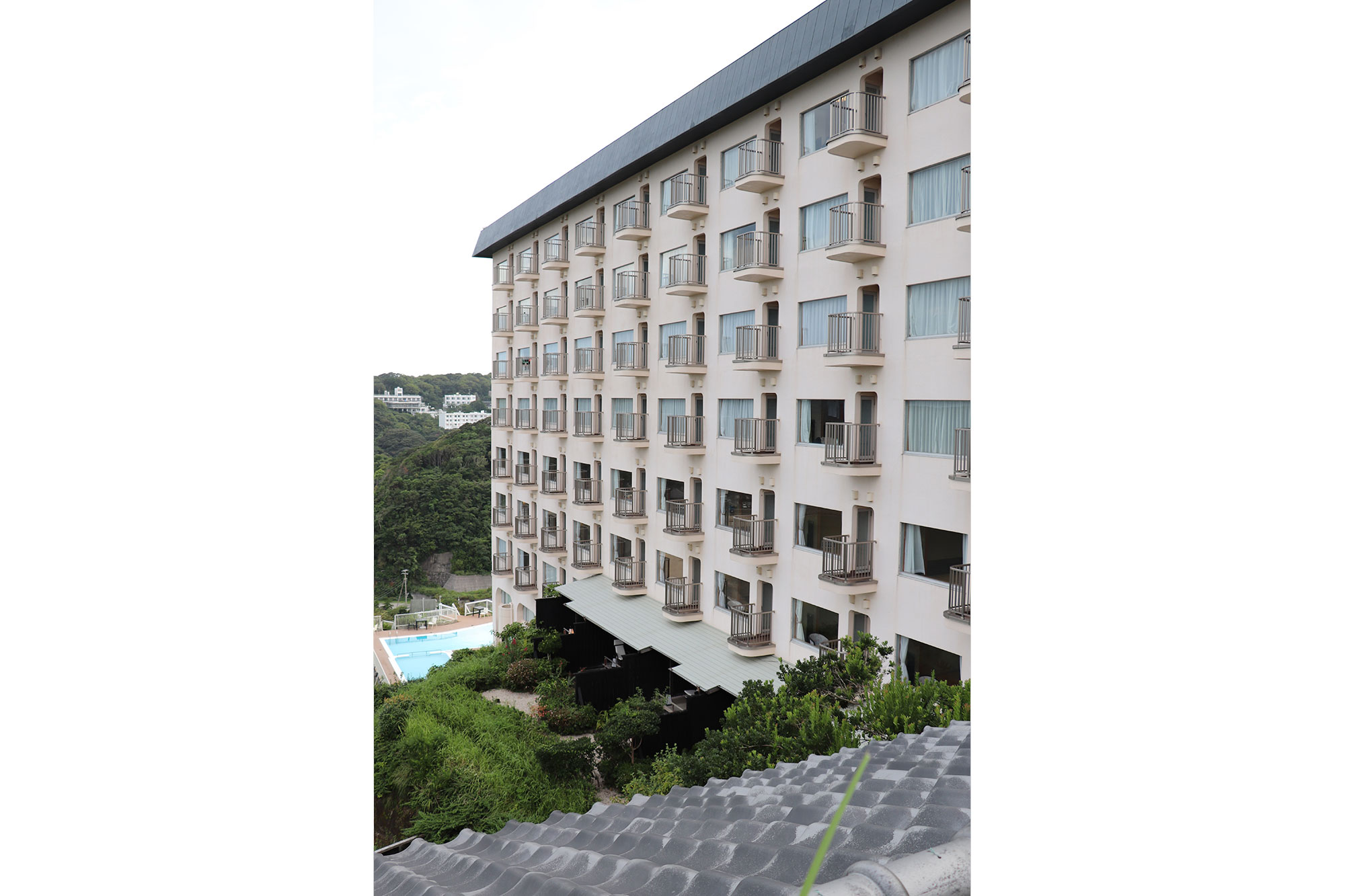 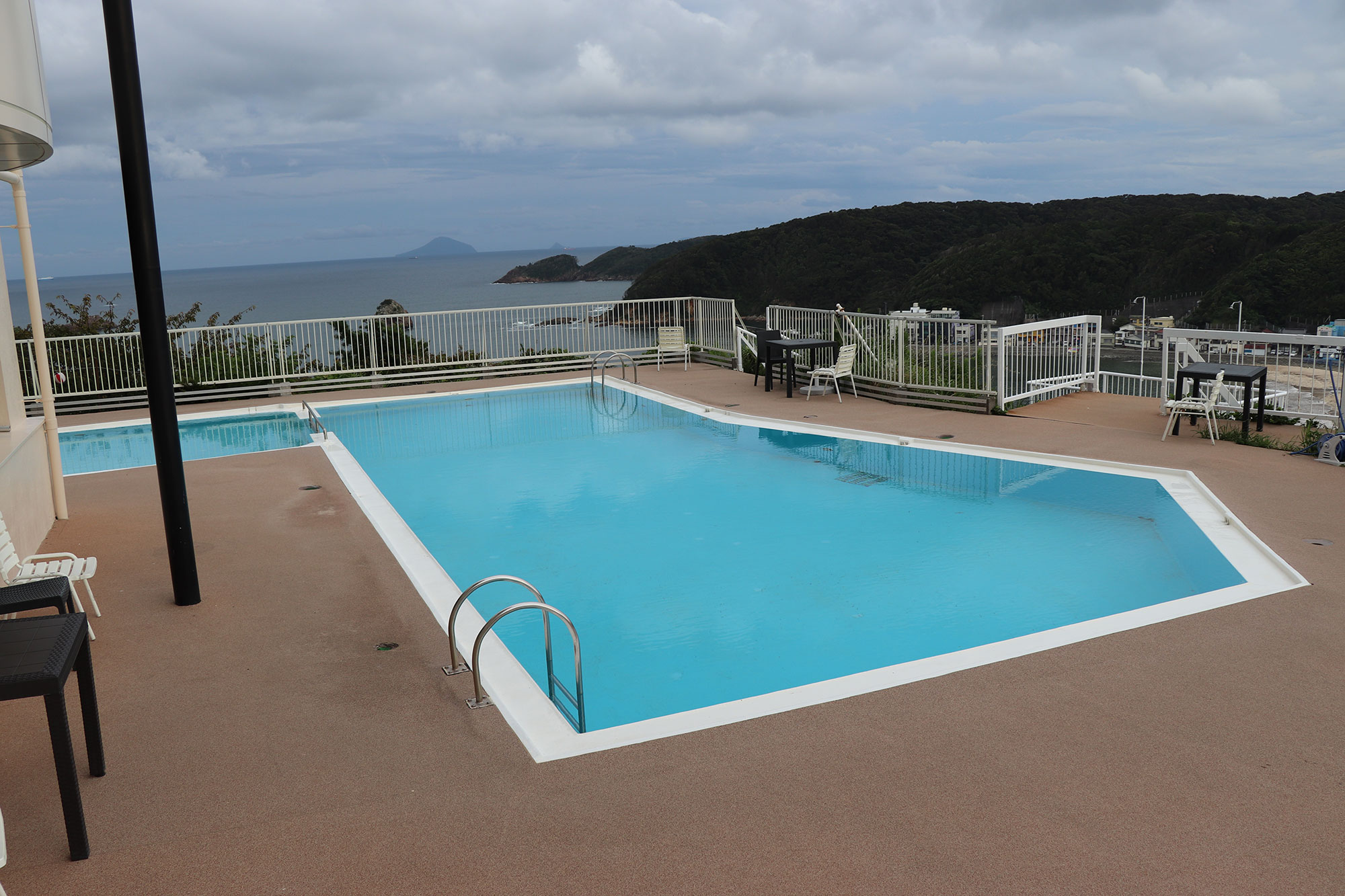 A hotel that offers full enjoyment of Izu’s leisure activities

So it has remained much loved by guests for all these years?

Mr. Maruyama: Yes, but the way people enjoy leisure has changed over the years, so we continue to put things in place that are in tune with the trends of the times. 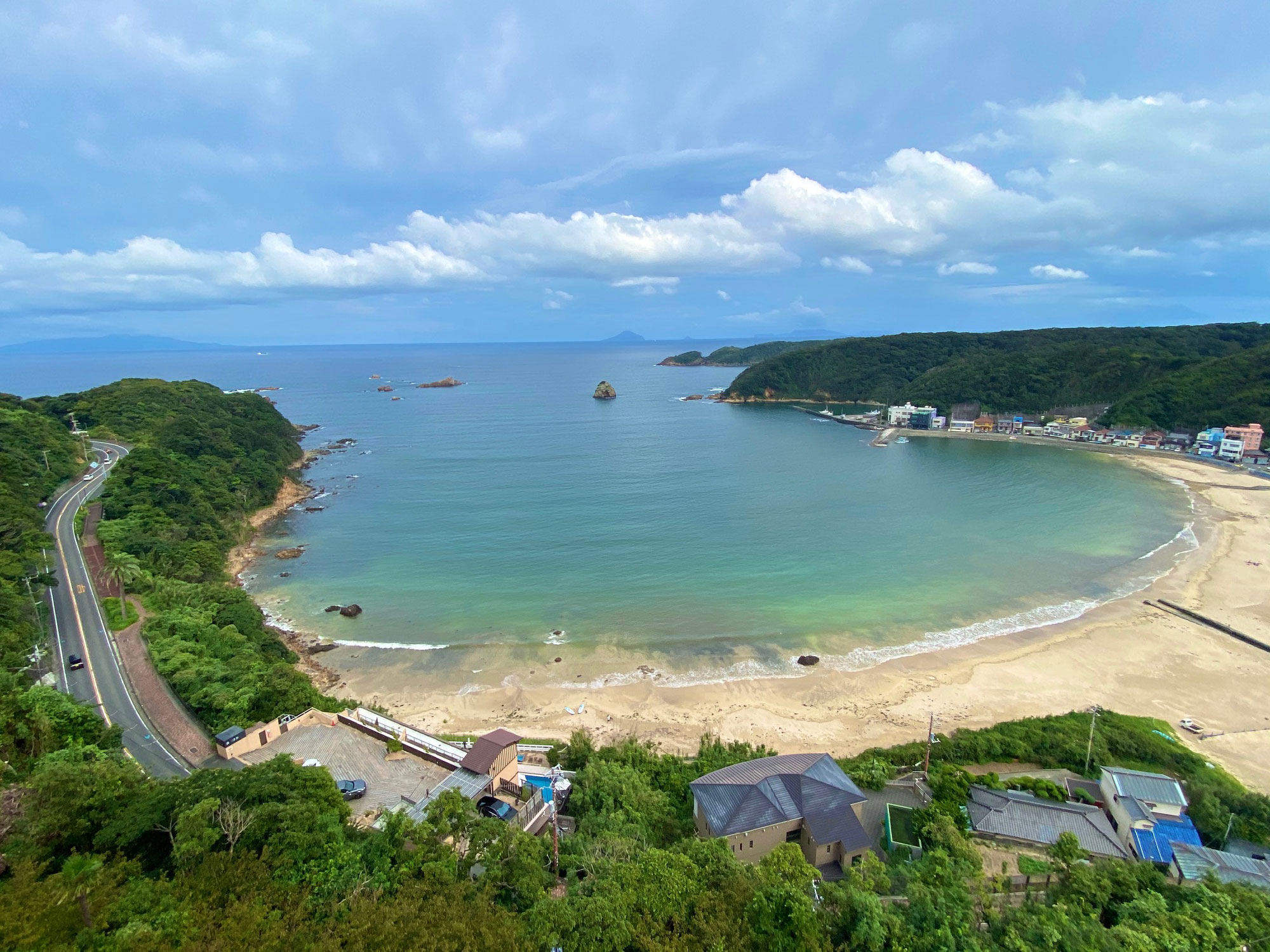 On that note, thank you very much for choosing Stanley’s LED floodlights. Could you tell us about the two small islands that are lit up by our products? 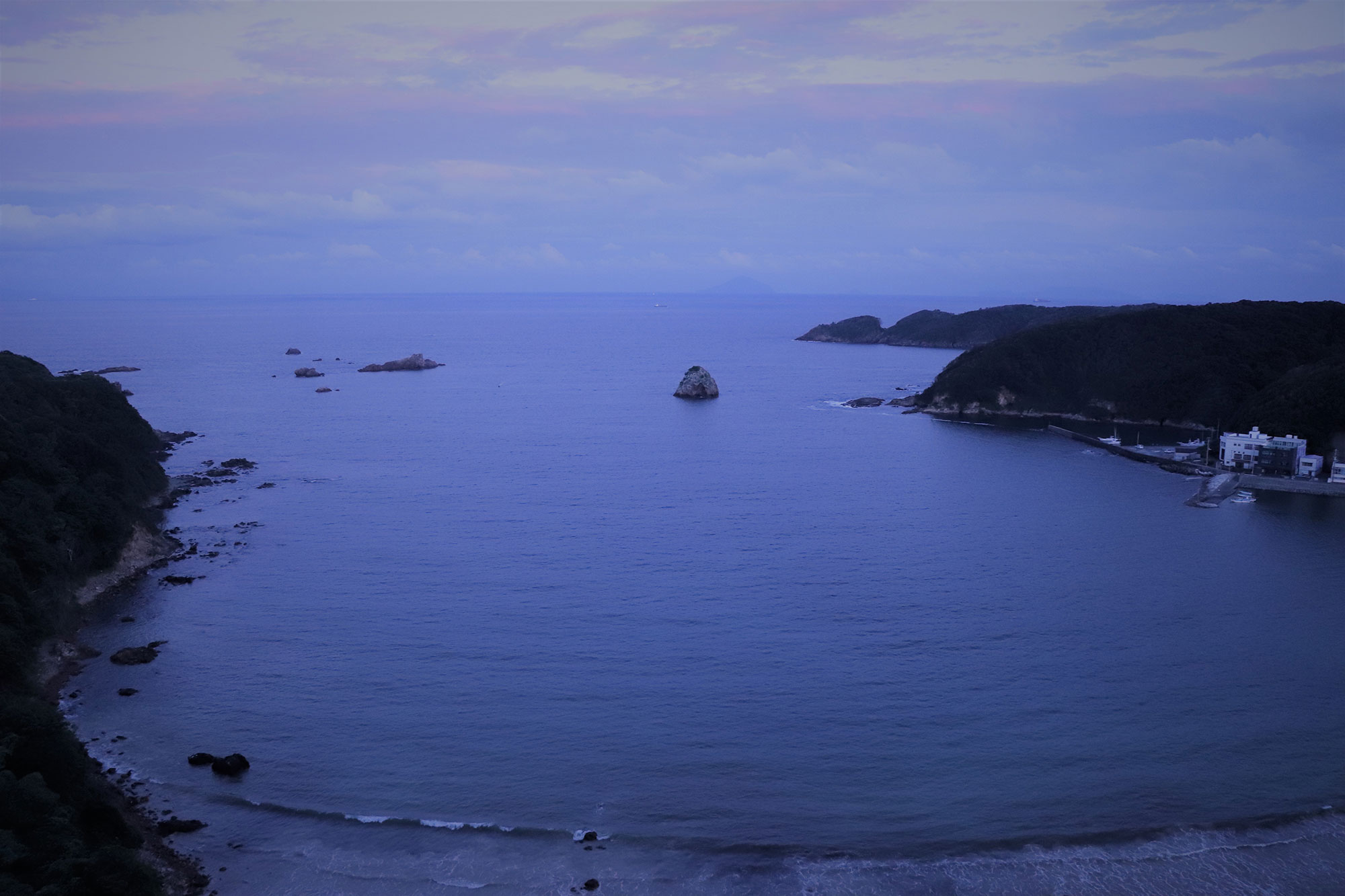 The two islands at dusk

They’re further away than they look, aren’t they?

Mr. Maruyama: We currently have one floodlight each directed at the two islands. During the new moon, they appear to float on the sea in a magical fashion.

Could you tell us the background behind how you came to choose our lights?

Mr. Maruyama: During the day, as you saw for yourself, these islands in the middle of the bay provide a kind of accent to the magnificent views, but at night, the bay is pitch black. We have many, many guests during summer vacation, but we wanted something that would prompt guests to come and stay in the off-season as well.

Certainly, it is particularly dark on nights of the new moon, isn’t it? The person at reception said that they had become something of an attraction and that guests in the bar and lounge asked about the islands.

Mr. Maruyama: I’m happy with the pin-point lighting, even though I’d love to install more lights and make it a bit brighter, but because some local people fish for lobsters at night, I’m controlling myself (laughs). 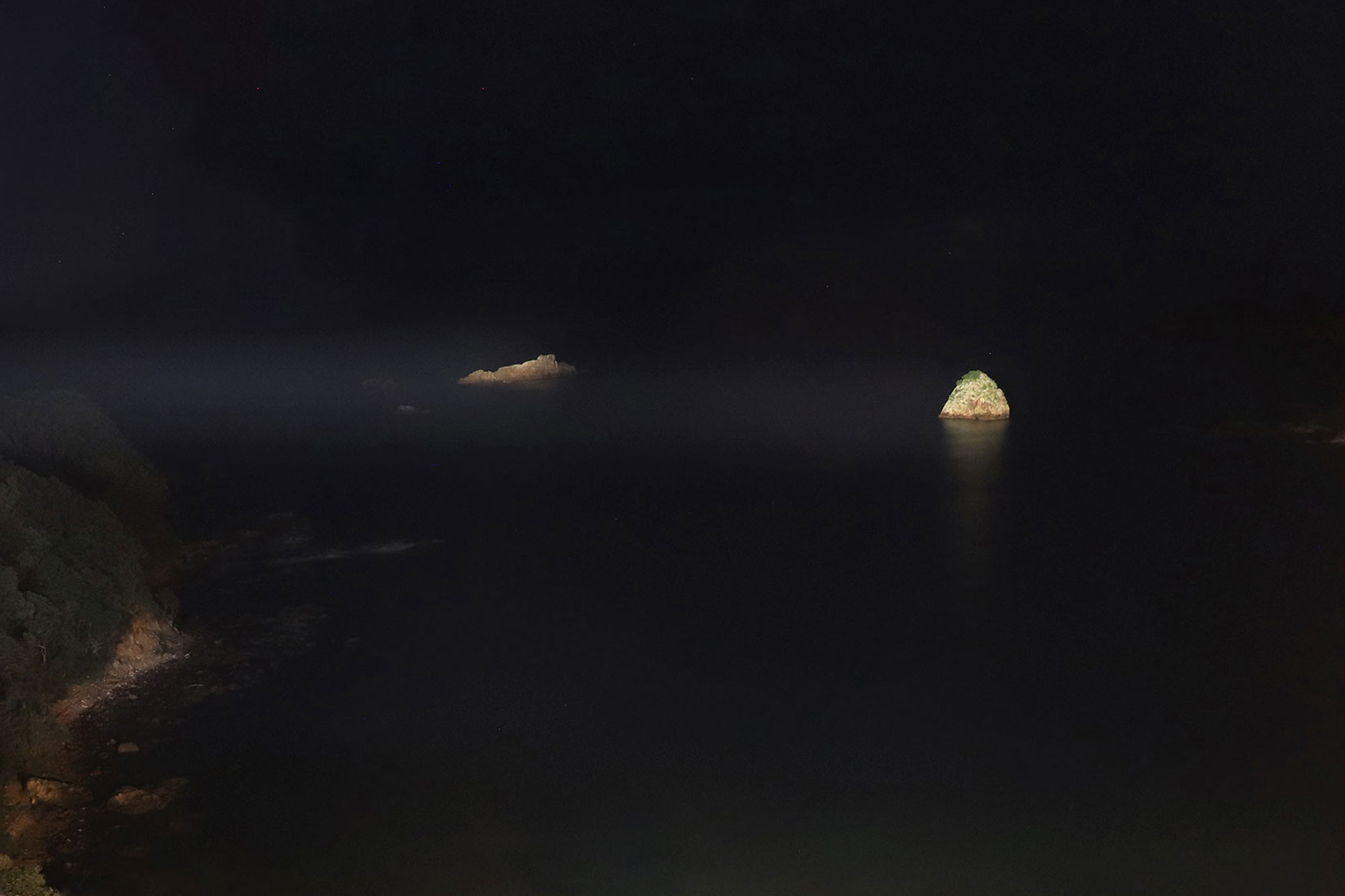 Islands lit up in magical fashion under the new moon, even with one floodlight

Because of the narrow-angled beam, the range of illumination is very narrow even at far distances, so the impact on the sea is limited.

Mr. Maruyama: On misty nights, the light looks sharper and I love how cool it looks. We’re a little worried about security on the parking lot side, so maybe we’ll install one of your floodlights there (laughs). 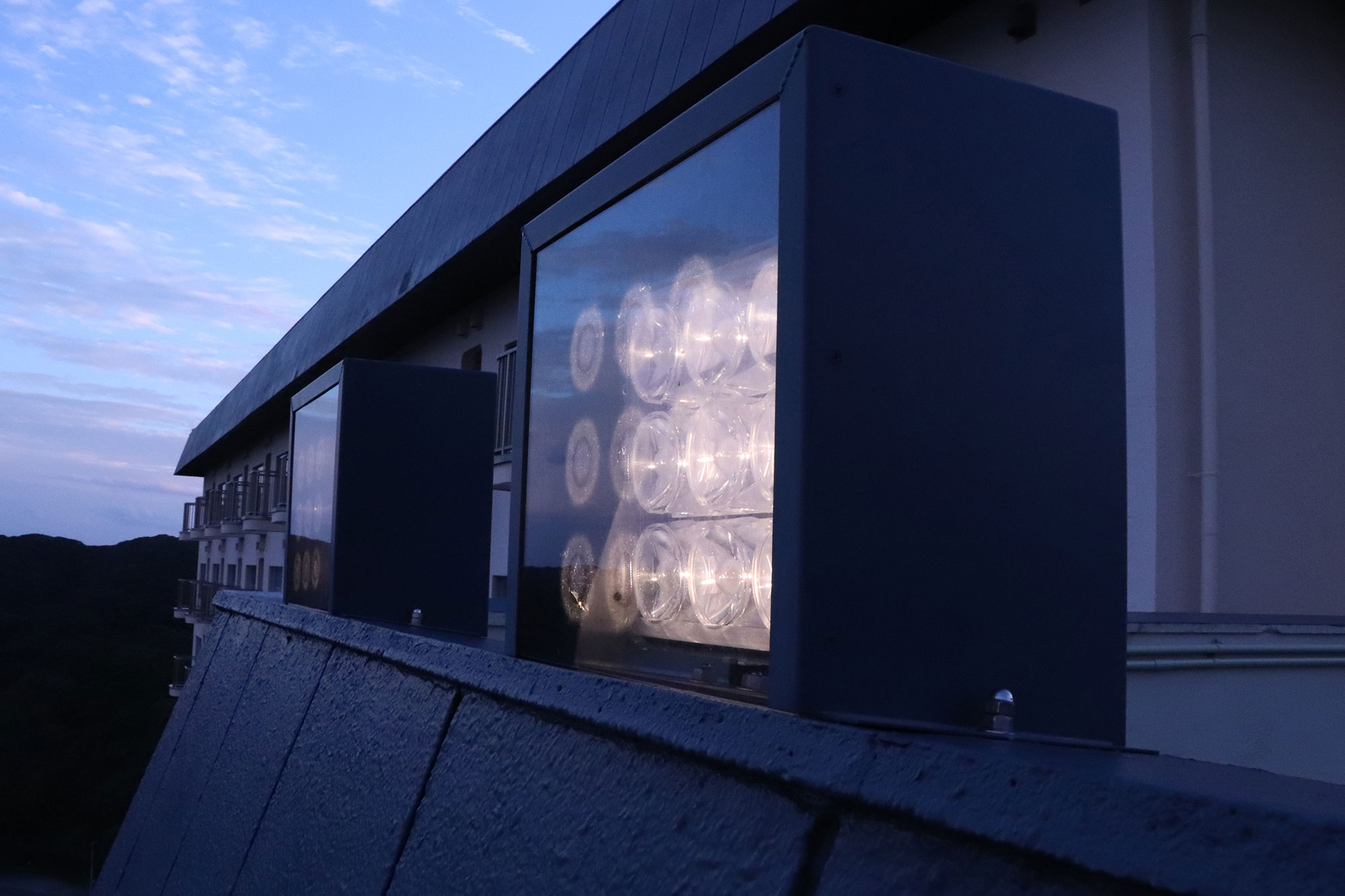 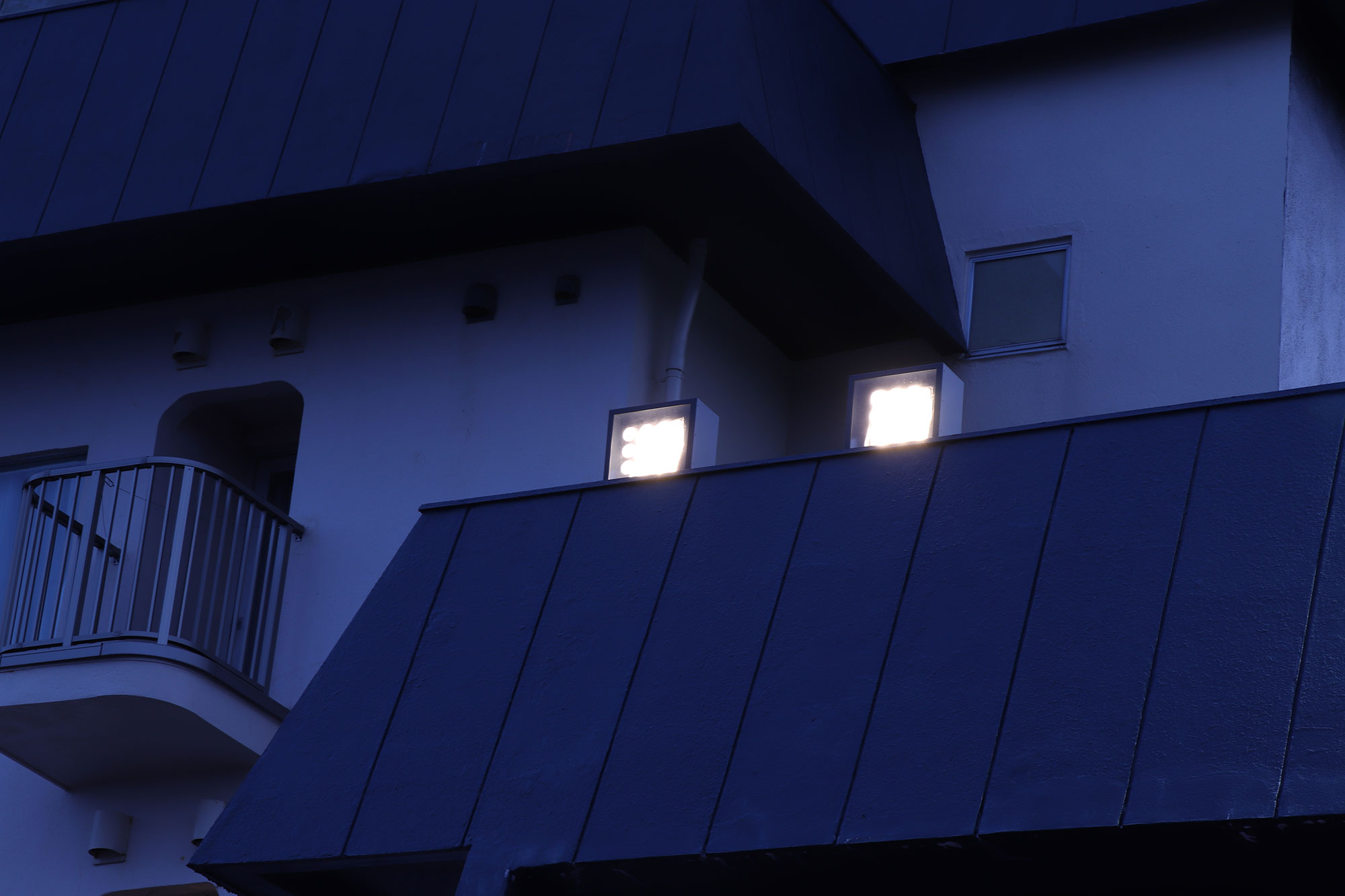 Because the hotel is built on the slope, it has an unusual layout, with the lobby situated on the 7th floor. Magnificent views can be enjoyed from the outdoor terrace of the bar and lounge on the lobby floor. If you look back from the terrace, you can see the floodlights installed on the 8th floor, which is the floor above.

Shimoda View Hotel is superblyIt also has wonderful hot spring baths, cuisine, and guest rooms.
located, offering some of Japan’s most spectacular views.
The excellent reviews it receives on travel websites are completely justified.
A stay at Shimoda View Hotel, which is a constant embodiment of Mr. Maruyama’s enthusiasm, will surely be a trip that will never be forgotten. 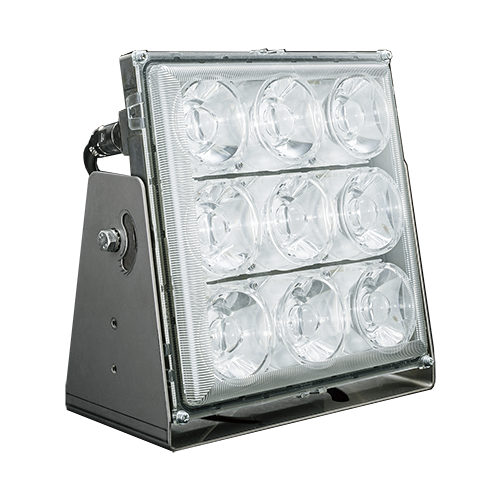