Light Curtain Appears in the Giant Water Tank in Aquarium! 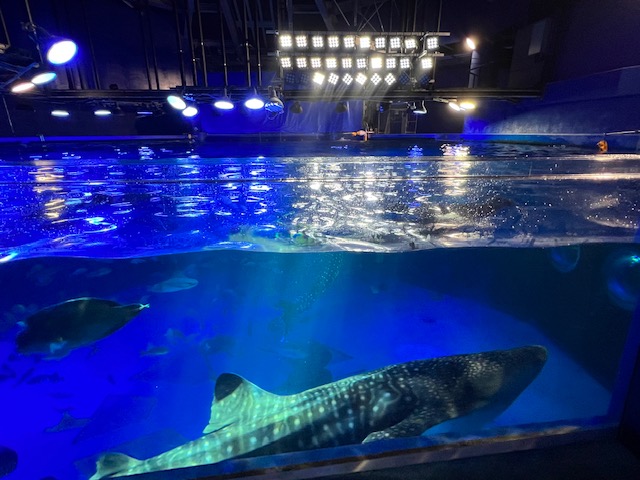 We are pleased to announce that our LED floodlights, LEDSFOCUS PRO, is now used at the huge aquarium tank of whale sharks and other species at Notojima Aquarium in Nanao City, Ishikawa Prefecture, Japan.

Notojima Aquarium opened in July 1982 as the only aquarium in Ishikawa Prefecture. One of the most popular exhibits in the aquarium is the giant water tank with 1,600 tons of water, titled “Whale Shark Zone: Blue World.” 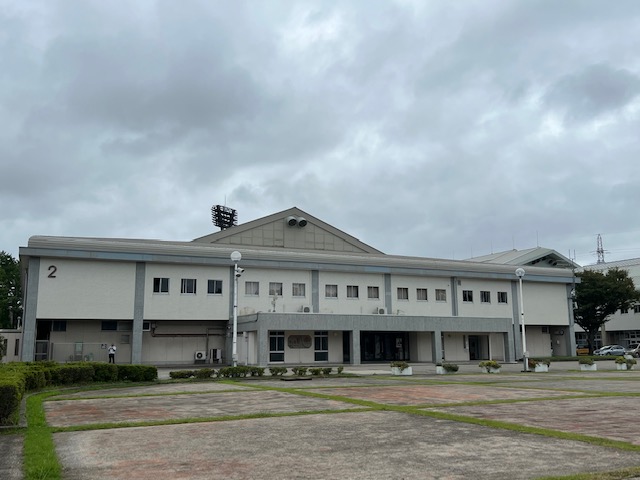 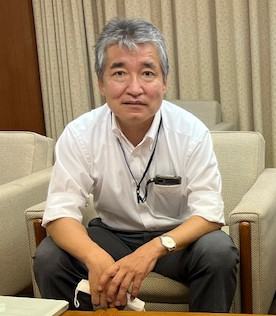 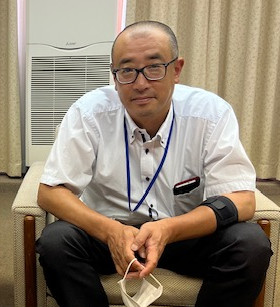 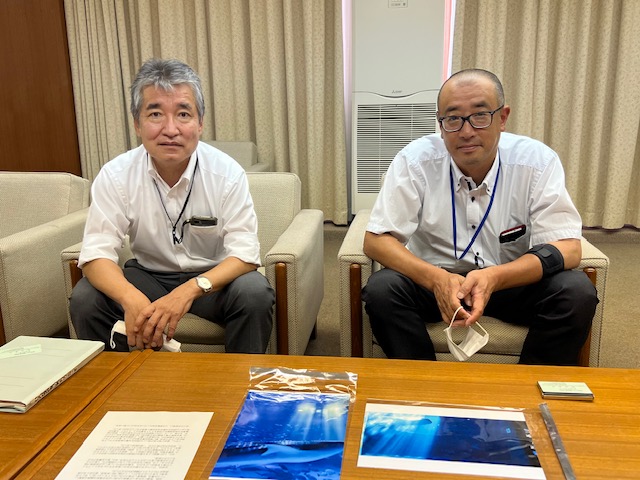 Thank you for taking time to talk with us.
We also appreciate you choosing our LED floodlight, LEDSFOCUS PRO.

Mr. Takeuchi and Mr. Yamada
Thank you for traveling all the way to Ishikawa Prefecture.

It is very nice to meet you two.
At first, could you tell us how you have decided to use our LEDSFOCUS PRO?

Mr. Takeuchi
About three years ago, when the roof of the tank was fished out with a crane to replace the whale sharks, sunlight shone into the tank (Blue World), creating a fantastic scene that shimmered like a curtain by accident.
It was a very surprising scenery because there had been no sunlight coming in for years.

The "Project to Study the Recreation of Flickering Light" was initiated out of a strong desire to have not only the keepers but also the guests somehow see this spectacle.

We are surprised to hear that it started out from the sunlight that came in by coincidence! What happened after that?

Mr. Yamada
Our first idea was to make a part of roof glass. However, the sunlight comes in beautifully only limited time of the day, and it is also weather dependent, so it is not possible to make it available for all guests despite the enormous cost of construction, and we gave up this idea.

So that’s how you came up with the idea to use LED!

Mr. Takeuchi
Yes. We contacted multiple leading LED manufacturers in Japan, but we thought we had to give up; some of them did not have corresponding lighting appliance, some of them brought in their appliance for experiment but the luminance was not enough, and we could not find a solution.
However, we just could not give up on recreating that beautiful and fantastic scene we had seen in the past. We did further research and found Stanley Electric’s LED floodlight, which is used in automobile headlamps, has great straightness of light, has been used in other aquarium and effective for presentation. 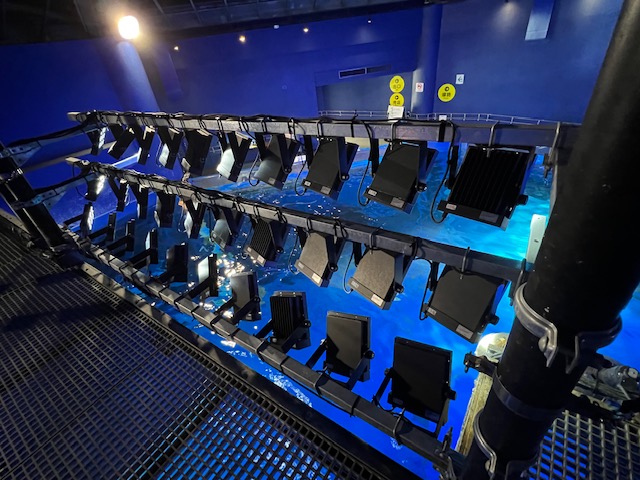 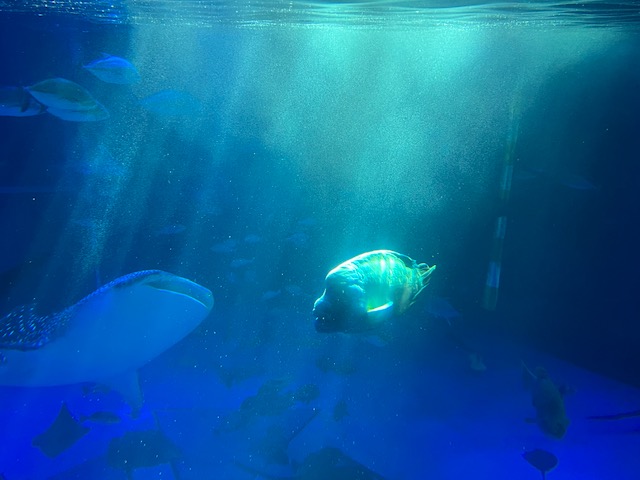 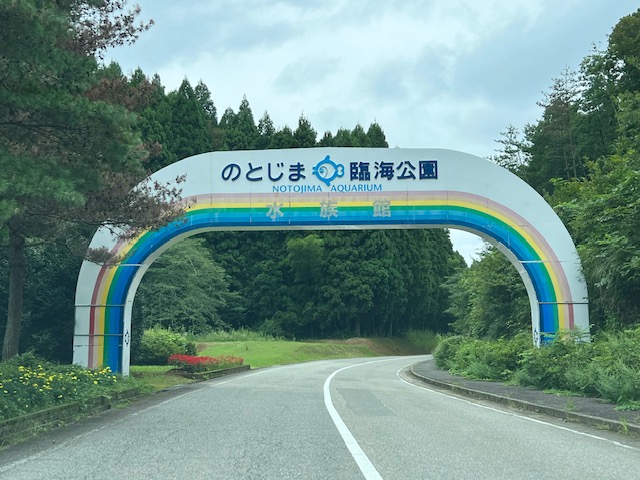 We are flattered that you have reached us after so much obstacles and effort.
As you just mentioned, we have a lot of experience in headlamps which is an important safety part for car safety, so our control of light (light distribution technology) has received very positive feedbacks.

Mr. Takeuchi
Yes, I heard that from your sales person.
After repeated tests of installation locations, angles and other factors through detailed discussions, we succeeded in recreating the fantastic scene of flickering sunlight almost perfectly.

Mr. Yamada
This is a great timing for us because it is the aquarium’s 40th anniversary year and we would like our guests to see some new variations.

It is such a nice story to hear from you.
As you install the LED floodlights, were there any concerns or difficulties?

Mr. Takeuchi
The first test was done with 6 units and the belt of light turned out so good, so we were sure that our plan to recreate the light with 30 units would work.

Mr. Yamada
We were concerned how the fish in the tank would react. They seemed somewhat restless in the beginning, but they calmed down as they got used to it.
This was something we could not find out until we do it, but it went well.

Mr. Takeuchi
If there was a reason to hesitate with this plan, it was because we do not wish to give a big change of environment in the fish tank, but we were relieved to see the result.
And then we did some on-site adjustment together to make the light belt where it is closer to the guests.

So there were efforts in the construction phase, too.

Mr. Takeuchi
Yes. Also, although not directly related, the Napoleon fish in the tank are easier to see than they were before with this new lighting. This is a by-product or unexpected effect.

Thank you for the interesting reference .
Lastly, we heard that you have decided the title of this lighting exhibition.


Mr. Takeuchi
Yes. During the summer, we asked our guests to choose from four choices and submit the voting paper in the box in front of the water tank. The choices are: “Light Curtain,” “Angel’s Stairs,” “Mermaid’s Dress,” and “Mermaid’s Stairs.”
The “Light Curtain” won 2,069 votes, which is more than half of the number of polls (3,828), so we decided it should be the title.
This year, the number of guests in July and August increased comparing to the past two summers.

The title sounds as great as the story of how LED installation started!
We hope that you will have even more visitors from now on.

Mr. Takeuchi
Thank you.As you told me you were going to visit the aquarium after this interview, I already let them know of your visit.
We are in Kanazawa City now, so it will take about 1.5 hours by car.
We hope you like the Light Curtain.

Yes, thank you for your kindness.
Talking with you two made us even more excited to visit the aquarium.
We are off to the aquarium now.
Mr. Takeuchi and Mr. Yamada, thank you so much for telling us the precious episodes.

After leaving the Ishikawa Prefectural Fureai Public Corporation, we drove along the Noto-satoyama Kaido (Sea Route) with the Senrihama Nagisa Driveway on the side, where you can drive along the sandy coast in your car, and arrived at the Notojima Aquarium in about 1.5 hours via Hakui City, Wakura Onsen, and the Notojima Bridge. 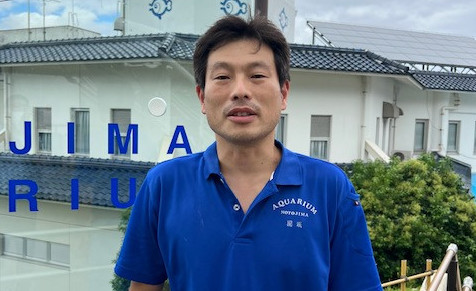 Mr. Kunito welcomed us at the aquarium.

Mr. Kunito, thank you for taking time to see us today.

Thank you.
Please tell us about you and the aquarium.
How long have you been working here?

You are very experienced, then.
What is the popular exhibit here?


Mr. Kunito
The whale sharks are one of the most popular exhibits here, but dolphin and sea lion shows are also very popular, as well as the penguins.
“Whale Shark Zone: Blue World” opened in August 2010, and the newly available “Light Curtain” which has just been named this summer is calling many people’s attention.

We are very happy to be part of such exhibit with our lighting.
Are the whale sharks in the tank also exist in the Japan Sea?


Mr. Kunito
They are not seen too often, but they come to the Japan Sea on the warm current around summer to the end of autumn. 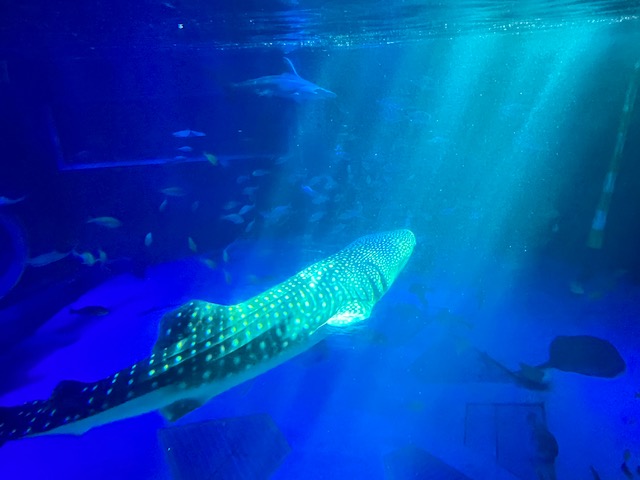 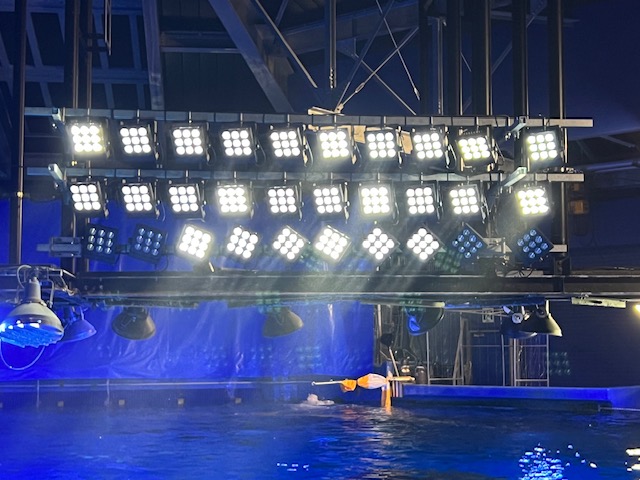 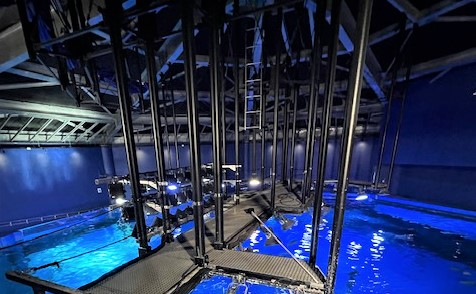 At the Ishikawa Prefectural Fureai Public Corporation, we heard their previous concern about change of the water tank’s environment with the light. What was your take on this as the caretaker?

Mr. Kunito
I used to have the same concern too, but there was no need to worry.
They appear to be relatively caretaker-friendly. They are as smart as to remember who their caretakers are, or what time they are to be fed, but they are not the sensitive ones.

We are relieved to hear that. What do they eat here?

Mr. Kunito
We feed them with krill, baby sardines, and banded blue-sprat.
Their food costs about 5,000 yen every day for the two of them, and the weight of food is from 7.5 to 9.0kg.

That’s how they grow so big.
By the way, why are the four floodlights below blinking while other 26 are not?


Mr. Kunito
They are blinking to recreate the flickering of the Light Curtain.

We heard about the flickering move at the Ishikawa Prefectural Fureai Public Corporation. So this is how it is made.
When you took us behind the water tank to see where the floodlights are installed on the upper side, we were wondering why some of them were blinking.
Lastly, please tell us what you love about working in the aquarium.


Mr. Kunito
I design the water tank or arrange the layout of exhibits, make them real, and when I see the guests be happy to see them, it makes me feel very happy.

Thank you. It is an amazing job, providing many people with wonderful dream.
We appreciate you talking with us today.


Mr. Kunito is managing the jellyfish now, and putting his effort in exhibition method and breeding. 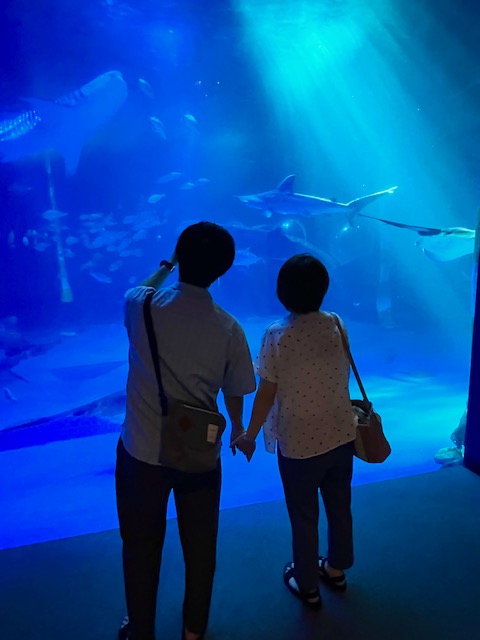 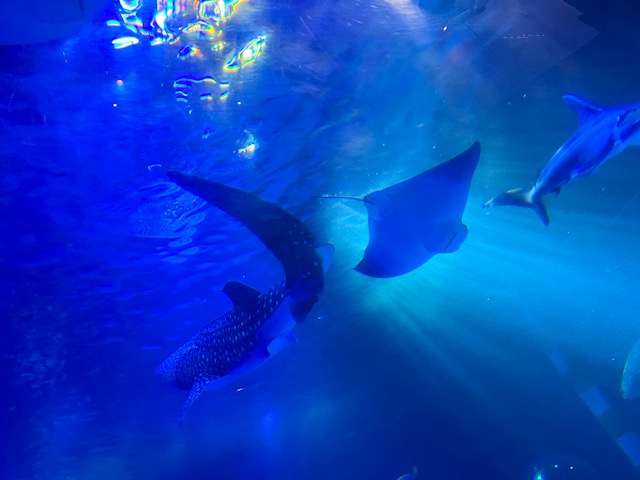 Lastly, here are some of the guests’ voices:

-The lighting looks fantastic; it is like a theater stage.
-With the extra light, I could even see the expressions of the sharks.
-It really is a light curtain in the water tank.
-It is not just healing but it is also romantic, and also best for a date!
-I could be looking at it forever.
-It feels magical, as if I am being pulled by the light in water! 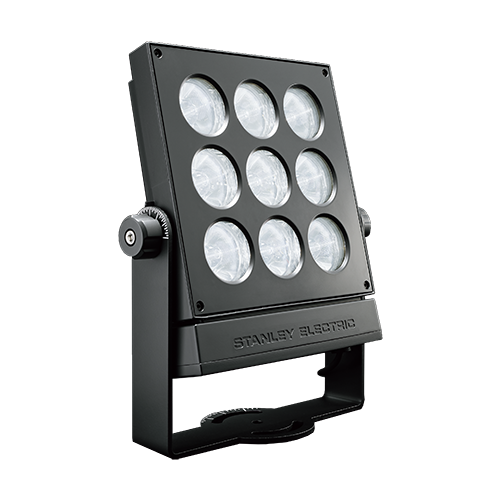 Along with the ultra-narrow light angle, different angles of LEDSFOCUS PRO are used to light the giant water tank to materialize the exhibit called the Light Curtain. 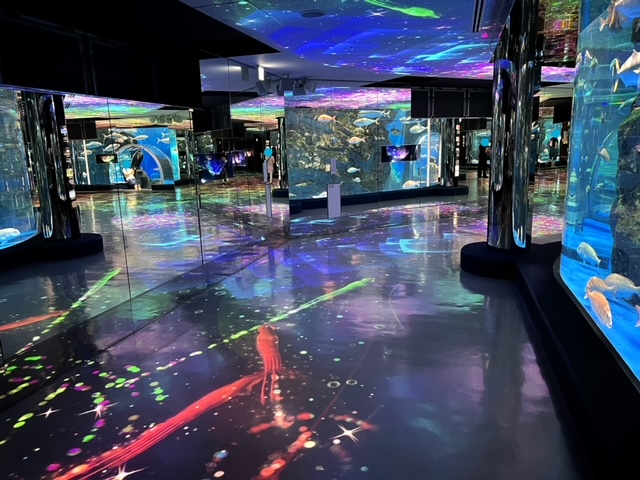 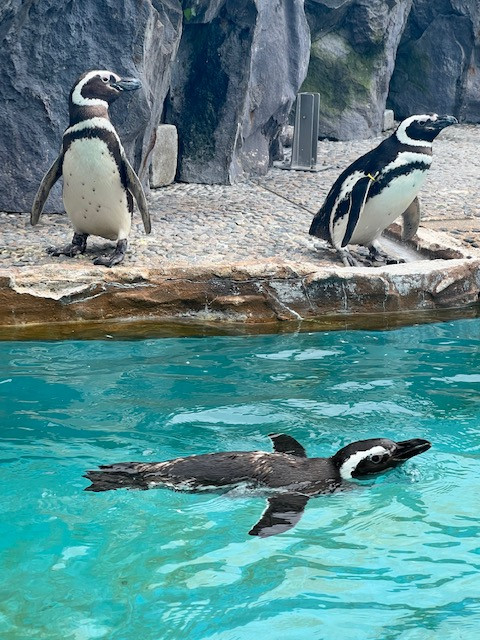 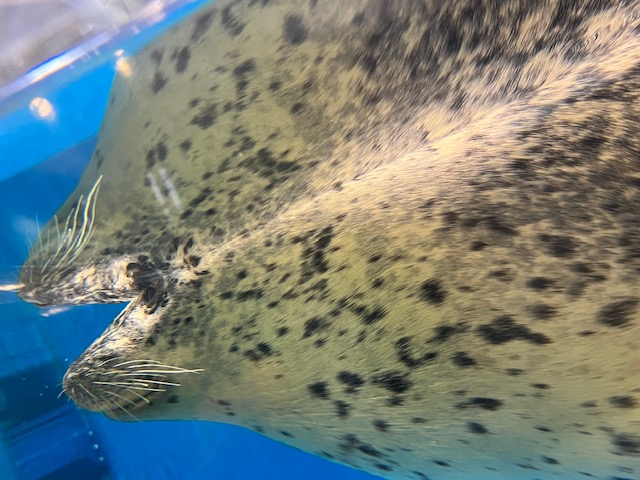 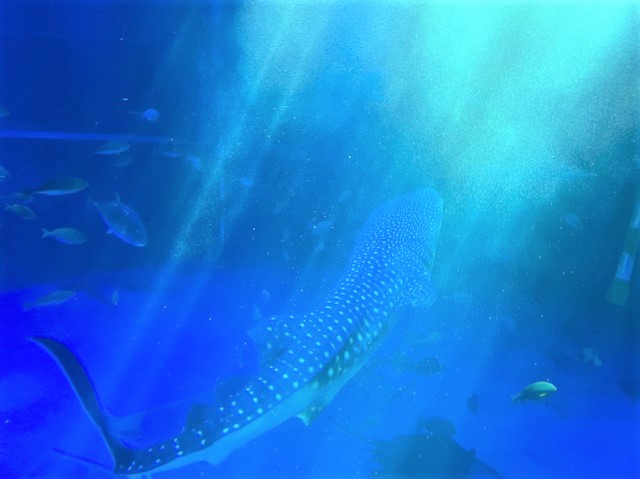 Please visit Notojima Aquarium and enjoy the Light Curtain with the whale sharks in the Blue World! 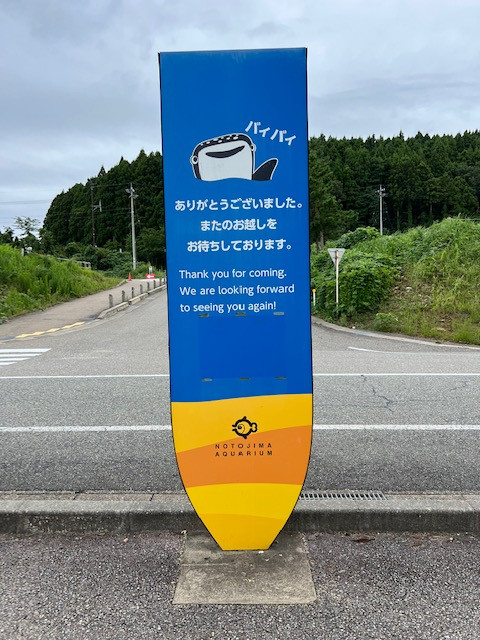